Origins and evolution of the tartar

The tartar is a preparation that is commonly made of raw meat or fish, macerated with different seasonings, sauces and to which is sometimes added egg.

About its origin, there are basically two theories, and in both the meat is its main ingredient. The first hypothesis states that it is a dish originating in Central Asia, where the well-known tribe of the Tartars placed the meat between the saddle and the back of the horse, so that it softened while they rode. The other theory states that it comes from French Polynesia, where it is common to consume raw meat and was popularized in hotels of French origin in the early twentieth century, a time in which the prestigious chef Auguste Escoffier carries out an update of several sauces, including the tartar sauce.

It is at the beginning of the 21st century when chefs reinvent this recipe and begin to prepare tartar with fish and vegetables, mainly due to the need for culinary innovation and due to the raw beef begins to be consumed with caution due to the known disease of the mad cows.

Regarding the different ways of fish tartar, the usual choices are the tuna and the salmon where it is incorporated fruity touches like the mango, the orange or the avocado. Some also add tomatoes and some dried fruit like pine nuts. Also, it is frequent to substitute the onion for onion in vinaigrette, capers, etc.

In short, there is an immense variety of ways to prepare a tartar. It is a very fresh dish, requested mostly as a starter, ideal for warm places such as the Canary Islands.

In the Maravilla Restaurant, you can enjoy the two varieties of the tartar made with salmon and fresh Bluefin tuna, as the islands are in the migratory path of this valued fish. Occasionally, we prepare a mango and avocado tartar, two of the representative crops of the municipality of Mogán, in the south of Gran Canaria. 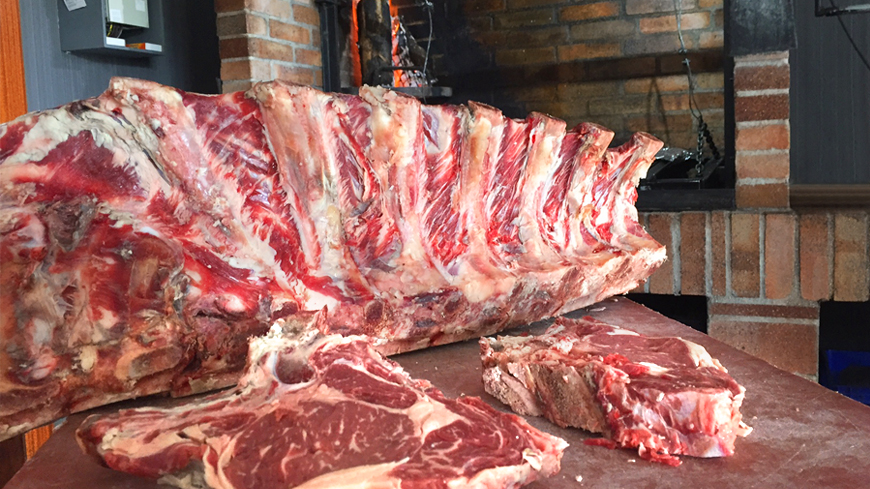 In our desire to offer our customers the best quality products, we have recently purchased a series of premium quality loins with a dry maturation between 30 and 60 days. For this reason, we wanted to publish this monographic article on the different maturation processes of meat and the advantages that this process provides to the product.

The process of maturation of the meat begins after the sacrifice of the animal where positive changes take place in the meat, contrary to what is thought. The advantages of a well-developed aging in optimum conditions will cause the meat to become tender, increase its juiciness and enhance aroma and flavour.

Currently there are two types of maturation process, the most common is wet aging, consisting of a short time period maturation of the meat in a canal, which can then be vacuum packed or not. This maturation with the muscles attached to the bones diminishes the contraction and elimination of the natural juices of the meat and, therefore, diminishes the losses by volume, obtaining a texture that tends more towards the tender than toward the tender. These meats are those that are usually available in most of the butchers and supermarkets.

The other process of maturation is the called dry aged, that much appreciated by cooks and lovers of good meat, which consists of a resting process that is subjected to meat for progressive aging in controlled temperature and humidity over an extended period combined with other processes such as cutting and vacuum packaging under specific environmental conditions, ensuring that it does not lose its properties. In this type of maturation, the decrease in volume is higher, but the increase of the tenderness and flavour of the meat counteracts of that decrease.

In Europe and in America, especially in Argentina and the United States, these aged cuts have become the object of desire of the most challenging gourmets, that look for them in specialized butchers, or even go to restaurants that exclusively dedicate to this type of meats.

Arguineguin bluefin tuna grilled meat matured meat Restaurante Grill Maravilla Restaurant in Gran Canaria south of Gran Canaria starters
We use own and third party cookies, analyzing your browsing habits on our website, in order to ensure the quality, safety and improvement of services offered through it.In cases where the user does not explicitly state whether to accept the installation of cookies, but continue using our website, it is understood to have consented, explicitly informing you of the ability to block or delete cookies installed on your team by setting browser options. You can get more information in this regard at our “Cookies Policy ”.Accept
Cookies Policy

This website uses cookies to improve your experience while you navigate through the website. Out of these, the cookies that are categorized as necessary are stored on your browser as they are essential for the working of basic functionalities of the website. We also use third-party cookies that help us analyze and understand how you use this website. These cookies will be stored in your browser only with your consent. You also have the option to opt-out of these cookies. But opting out of some of these cookies may affect your browsing experience.
Necessary Always Enabled
Necessary cookies are absolutely essential for the website to function properly. This category only includes cookies that ensures basic functionalities and security features of the website. These cookies do not store any personal information.
Non-necessary
Any cookies that may not be particularly necessary for the website to function and is used specifically to collect user personal data via analytics, ads, other embedded contents are termed as non-necessary cookies. It is mandatory to procure user consent prior to running these cookies on your website.
SAVE & ACCEPT